Fueled by technological progress in digital technologies, the fashion industry and the creative industries are in flux. The Classes of 2020 – 2022 have been asked in the seminar ‘foresight and digital sustainable transformation’ to work on the underlying dynamics that have been shaping the last 10 years and will be shaping the next ten years. Equipped with a nuanced perspective on dynamics and foresight the Classes of 2020 – 2022 have been doing formidable steps in understanding and grasping the opportunities of digital sustainable transformation. I am happy that these will now be put to discussion (Prof. Dr. Ingo Rollwagen).

The Beauo-tic Intelligence for Second Skins
Neo Cognitive Revolution: The Brain Interface As Our Future
Phygital Futures: The Healthcare System in the Metaverse
ctrl PRINT Your Wardrobe: An Open Source Fashion System
I believe in descience! 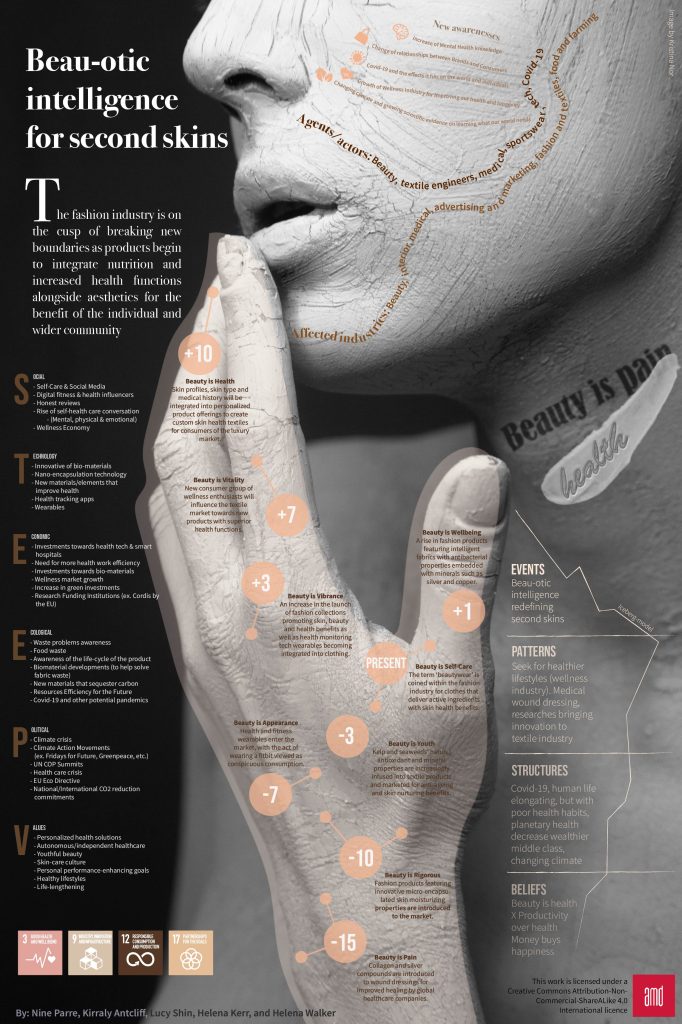 The Beauo-tic Intelligence for Second Skins

Skin health beneficial technology integrated into fashion and textiles forms the foundation of the dynamic Beau-otic Intelligence and Second Skins. The overall image that emerges from the research into how the dynamic has been evolving in the aftermath of the COVID-19 crisis, and its relevance in the sustainable digital transformation of fashion and creative industries up to 2030, is the intersection of the health care, beauty and fashion industry parallel to the evolving perception of beauty standards in society. Going beyond the status quo of fashion existing purely for its aesthetic beauty, the research highlights growing developments towards new inclusive products with superior and personalised health functions considered as seconds skins. The future developments of the dynamic take into account paradoxical properties and places focus on sustainability and climate change as it highlights the contradiction of the dynamic which focuses on personal health, which is contingent on the health of our local and planetary ecosystems. The research further explores the relationship between our skin and ‘second skin’ for a future where fashion interacts with the personalised health needs of the wearer influenced by the sustainable digital transformation for a future that aligns with the 2030 Sustainable Development Goals. 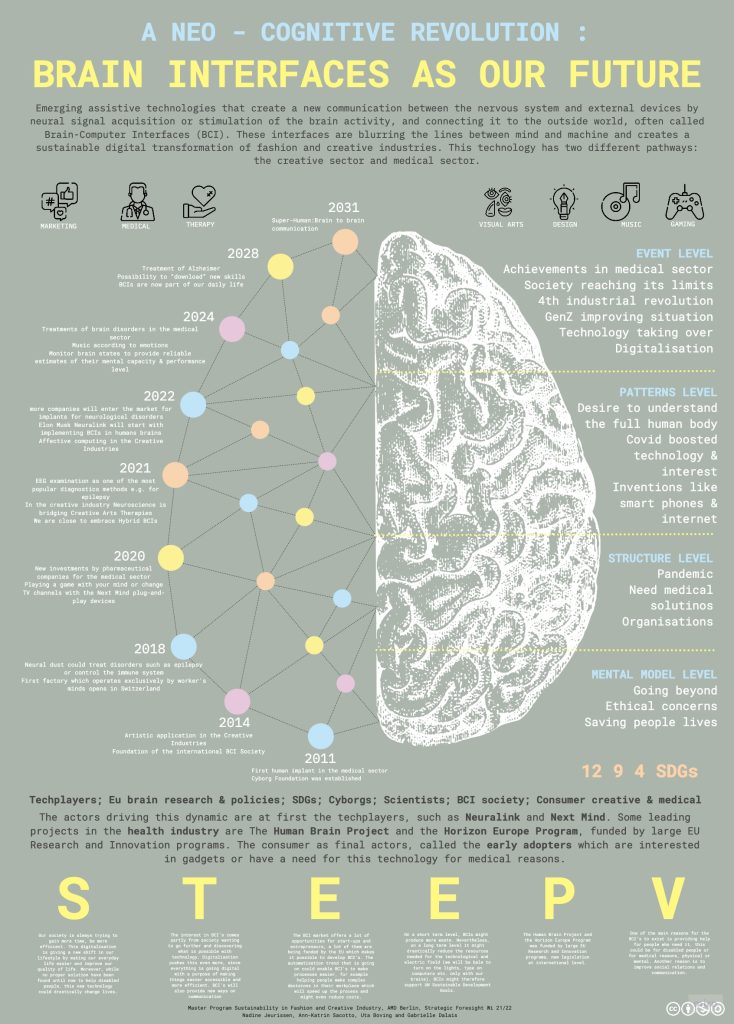 Neo Cognitive Revolution: The Brain Interface As Our Future

At its core, brain-computer interface (BCI) is about extending our human capabilities or compensating for lost ones. BCIs, or neural interfaces, are emerging assistive technologies that create a new communication between the nervous system and external devices by neural signal acquisition or stimulation of the brain activity. This neo cognitive revolution has been a dynamic for some years already but its maturity will unfold drastically in the next ten years. The brain-computer interfaces blur the lines between mind and machine could radically transform our interaction with the medical, educational, technological, professional, and creative sectors. From curing depression to brain-to-brain communication; from opening doors to downloading skills; from intuitive playing to health monitoring.

At the moment, technology is ahead of consumers. Meaning the design and user experience of BCIs are still at an early stage. While research and development increased over the past years, the amount of use is rather small, but is expected to increase in the next few years as BCIs are becoming more commercial/are developing into a commercial good. Sustainability is not yet a priority for BCIs, nonetheless there is great potential. It could enhance individual learning processes (SDG 4), let us communicate with devices around us and enhance decision-making (SDG 9). A positive change in production patterns, which could lead to more efficiency and less waste (SDG 12).

Brain-computer interfaces raise critical ethical concerns over issues such as privacy, autonomy, human rights and equality of access. This neo cognitive revolution may challenge the very essence of what it is to be human and could also help toward a more sustainable future. The question is not whether these BCIs will come and whether we are ready for them, but how we are going to shape the world around us according to these changes. 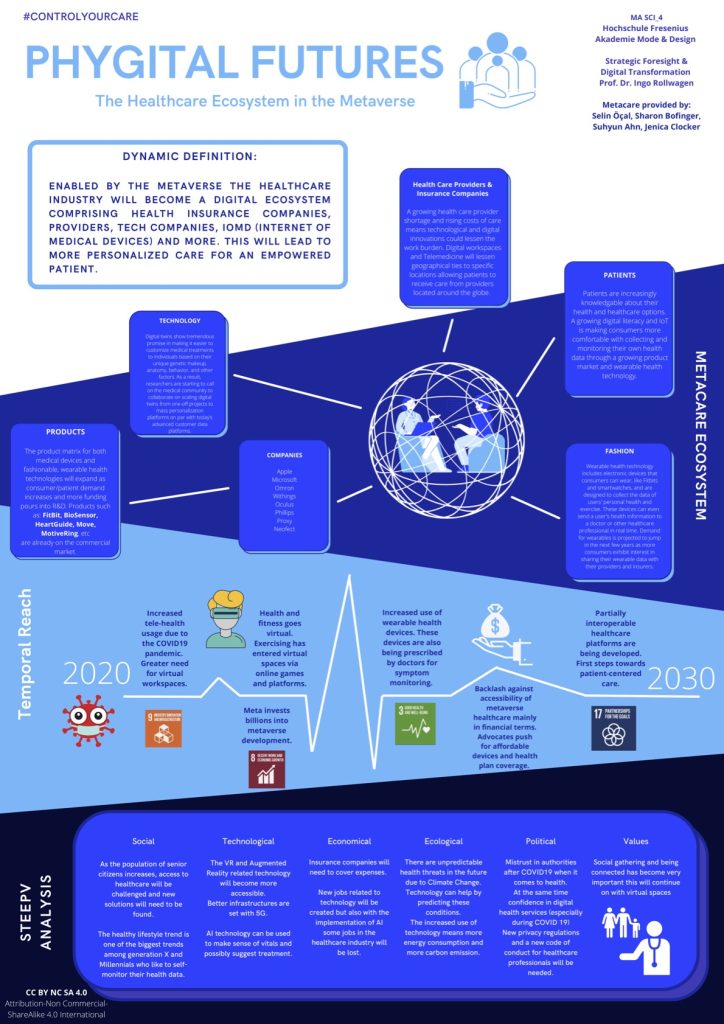 Phygital Futures: The Healthcare System in the Metaverse

Touted as the next greatest thing that’s just around the corner, the Metaverse has received a lot of attention recently. Billion dollar investments are being poured into the hardware and software required to develop the platforms that will create the virtual world we are supposed to inhabit. The use of wearable healthcare technology is also on the rise, yet the gap between the needs of patients and what developers design, manufacture, and bring to market, remains to be filled. Furthermore, governments and health insurance providers need to begin working cooperatively to form the necessary legal framework that will underpin the metaverse healthcare ecosystem. Based on our analysis using futures thinking for transformation, the Causal Layered Analysis and STEEPV analysis, we have found that the most expected outcome is the “Partial Patient Care” scenario. This scenario is characterized by certain areas of the metaverse being fully functional and available, while other areas, especially in terms of interoperability and government policy, remain underdeveloped. The paradigm shift towards the adoption of a global, patient centered healthcare ecosystem, affordable health insurance plans, and cooperation between industry sectors will happen slowly over time and require a change in the worldview of our society. 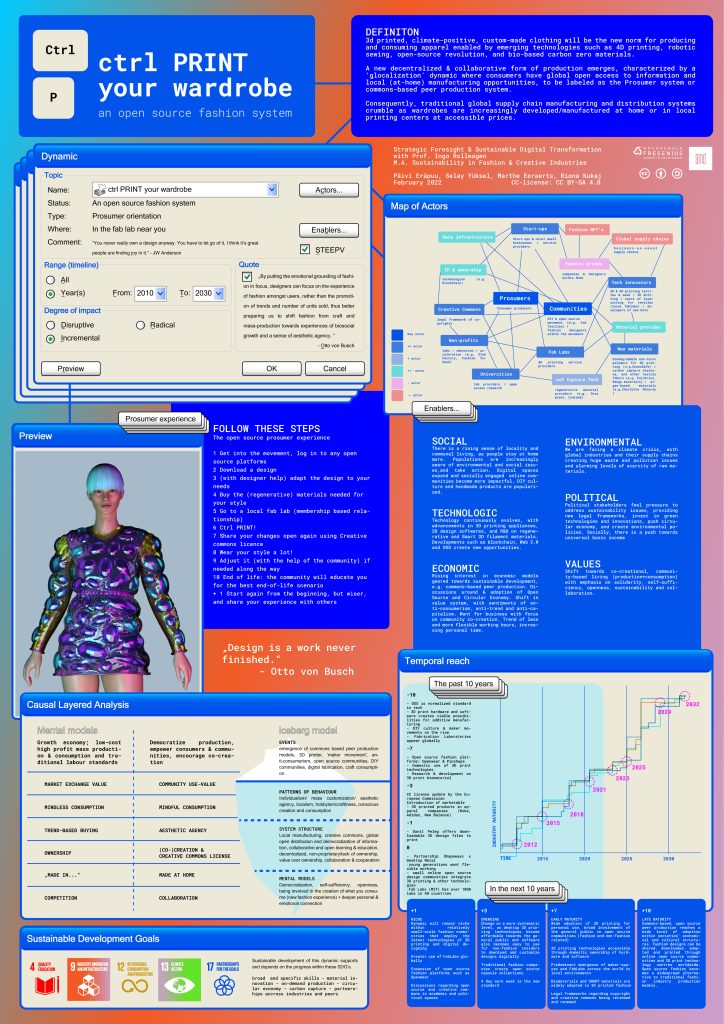 3D printed, climate-positive, custom-made clothing will be the new norm for producing and consuming apparel enabled by emerging technologies such as 4D printing, robotic sewing, open-source revolution, and bio-based carbon zero materials. A new decentralized & collaborative form of production emerges, characterized by a ‘glocalization’ dynamic where consumers have global open access to information and local (at-home) manufacturing opportunities, to be labeled as the Prosumer system or commons-based peer production system. Consequently, traditional global supply chain manufacturing and distribution systems crumble as wardrobes are increasingly developed/manufactured at home or in local printing centers at accessible prices.

A causal layered analysis shows how the underlying mental models prevalent in the growth economy drive the dynamic: people feel like they have become detached from their own self through lack of connection to the material things they own. Fashion has become something we currently follow, more than it is a representation of a feeling within or a reflection of ourselves. It should be the other way around. A prosumer will shift that mindset away from mass-production and trend-based buying towards having experiences of biosocial growth and a sense of aesthetic agency when interacting with fashion.

It is estimated that this dynamic spanning over the next ten years will create an incremental impact in the fashion industry. The dynamic touches UN’s SDGs 4 – Quality education, 9 – Industry, Innovation and Infrastructure, 12 – Responsible consumption, 13 – Climate action, 17 – Partnership for goals. 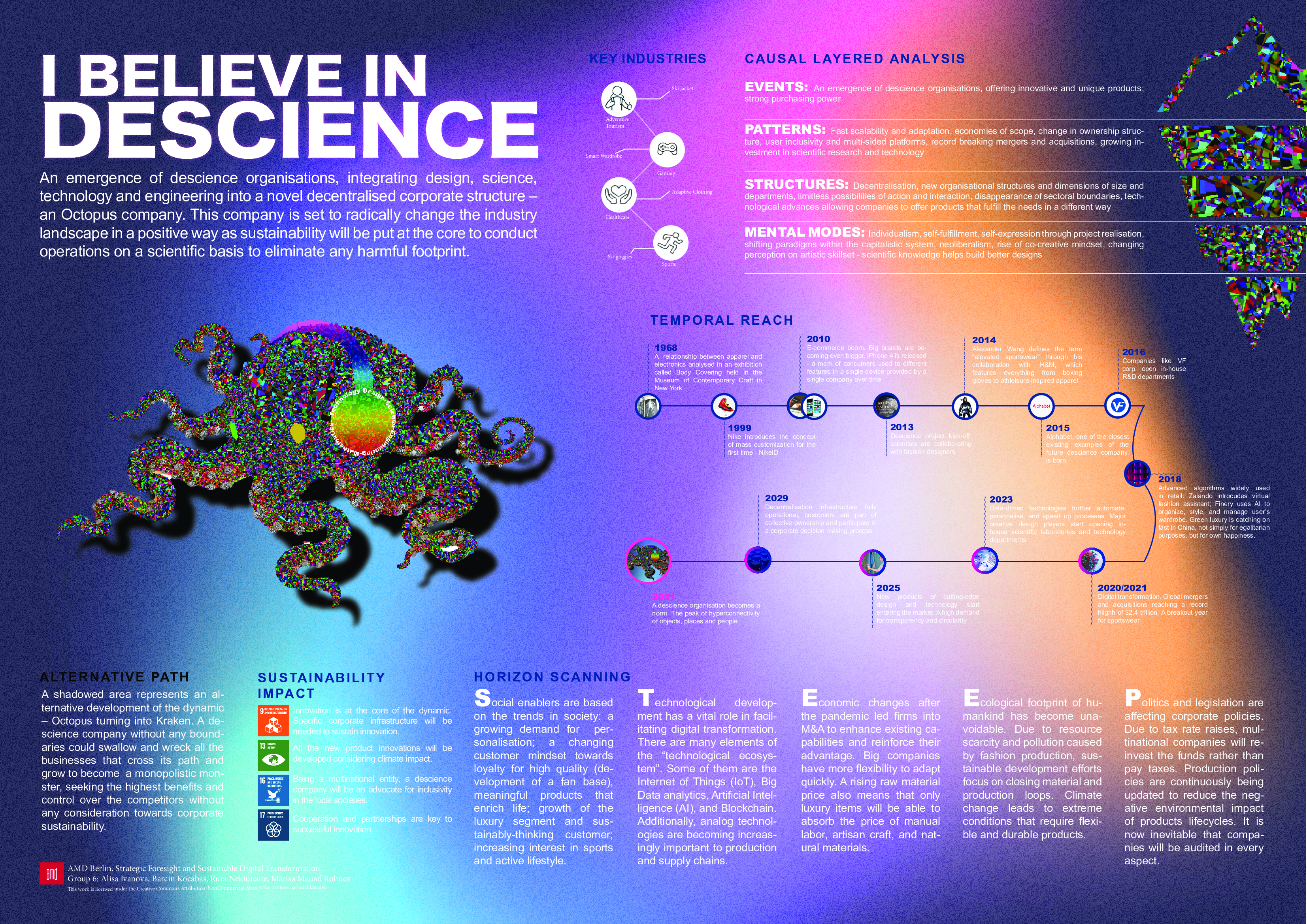 In the project “I believe in descience!” the future dynamic of the emergence of descience companies in the fashion industry in the next 10 years is examined. The underlying assumption of this dynamic is that new types of organisations offering new products due to their access to digital and analogue technological innovations in different branches and industries will dominate the fashion market. The competencies of those companies will especially lay in bringing design and science together, establishing a creative “descience” orientation. The products and services offered by these companies will revolve around special solutions that will remain unique in the industry. Clothing with an integrated forecast and analytics system or a smart wardrobe that gives style suggestions and insights on user behaviour would then not be products of a sci-fi movie but the reality. The rise of those conglomerates with a lot of power to sense, seize, and transform the fashion industry will be facilitated by changes in the collective conscious and unconscious understanding related to desirability, values, systems, and paradigms. The interaction with other actors like governments or civil society will influence the companies’ impact. However, the companies themselves are going to decide how they will use their power. Thus, the dynamic has two possible developments: the rise of the flexible, innovative, adaptive Octopus-like companies, driving the positive change or monopolistic Kraken-like conglomerates, which are ready to swallow the competition. 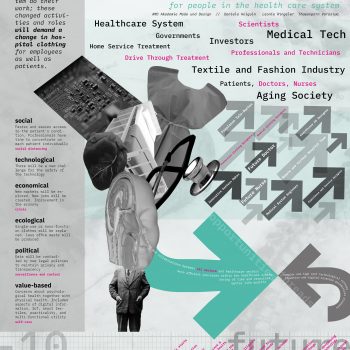 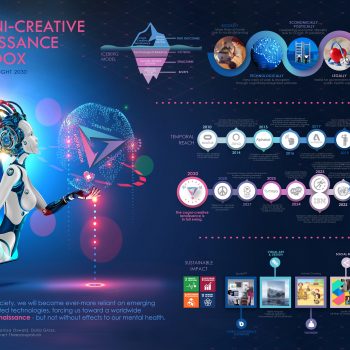 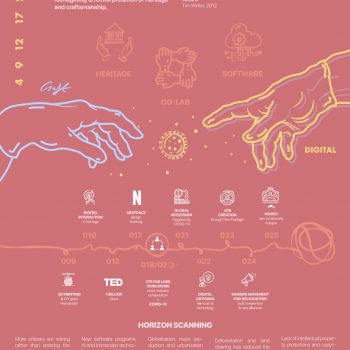 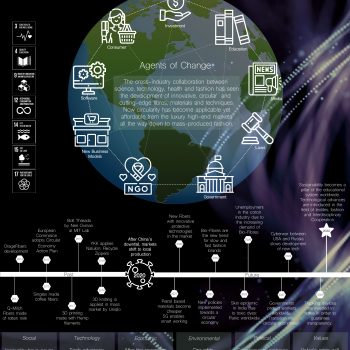 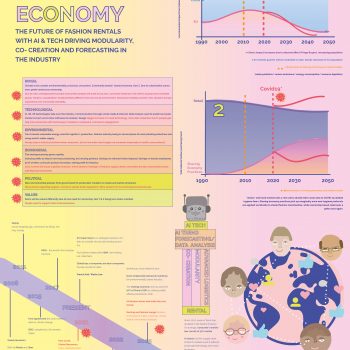 "Fabrication of a Shared Economy" by Clara, Ganimat, Florentine & Niamh 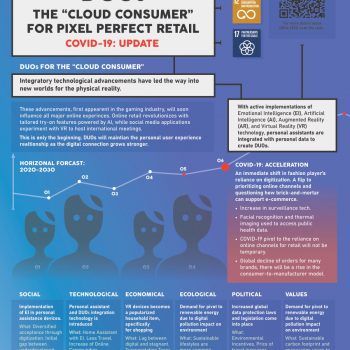 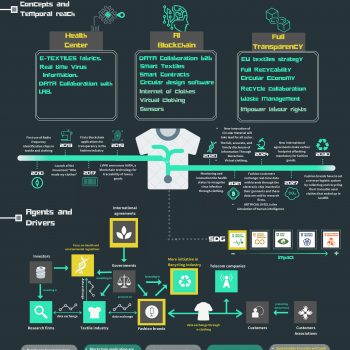 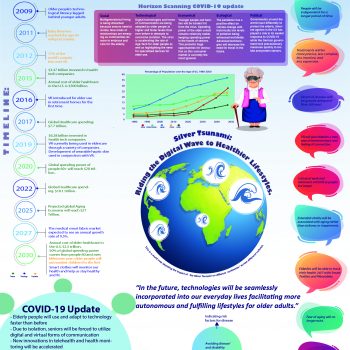 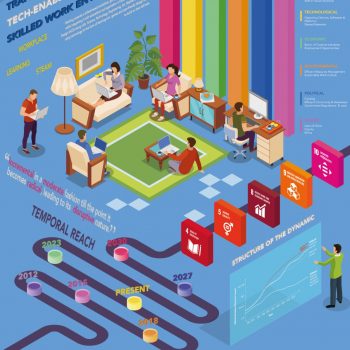 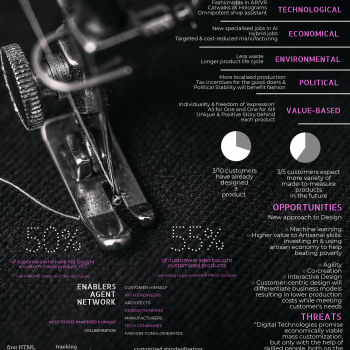 "Bespoke Collective Experiences: Make It your Own" by Baily, Maria, Stylianee, Tatiana 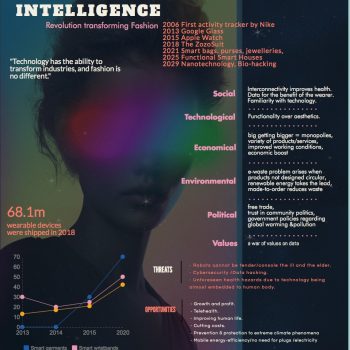 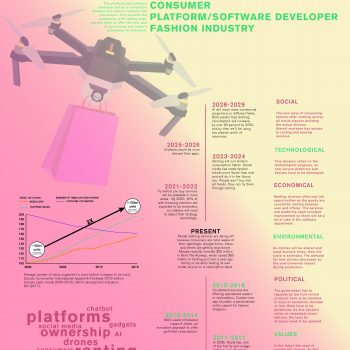 "Access is the new owning I" by Annika, Cécile, Inês & Sara 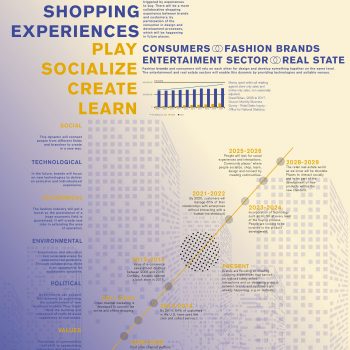 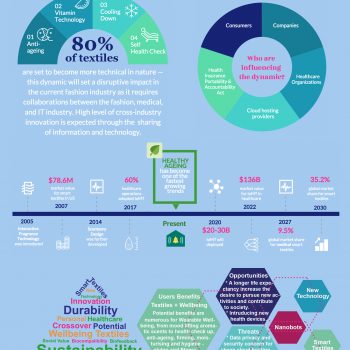 "Smart Textiles For Our Wellbeing" by Crystal & Ataul

"The outsmarted home which matches your life" by Annelotte, Jaqueline, Linda & Virginia 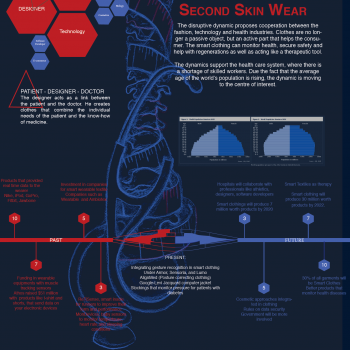 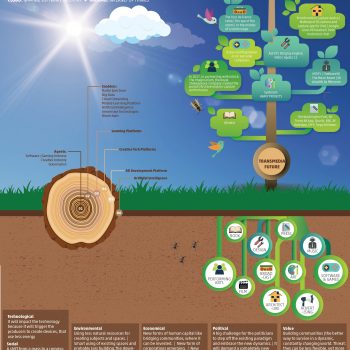 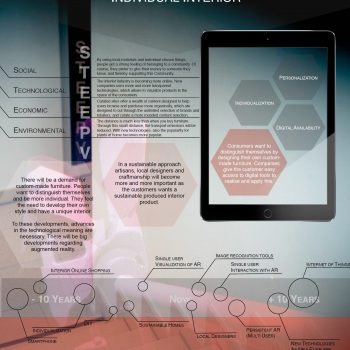