The acidity of the ocean has increased by 26% since the beginning of the industrial era.

50% of marine life is expected to be affected by ocean acidification. 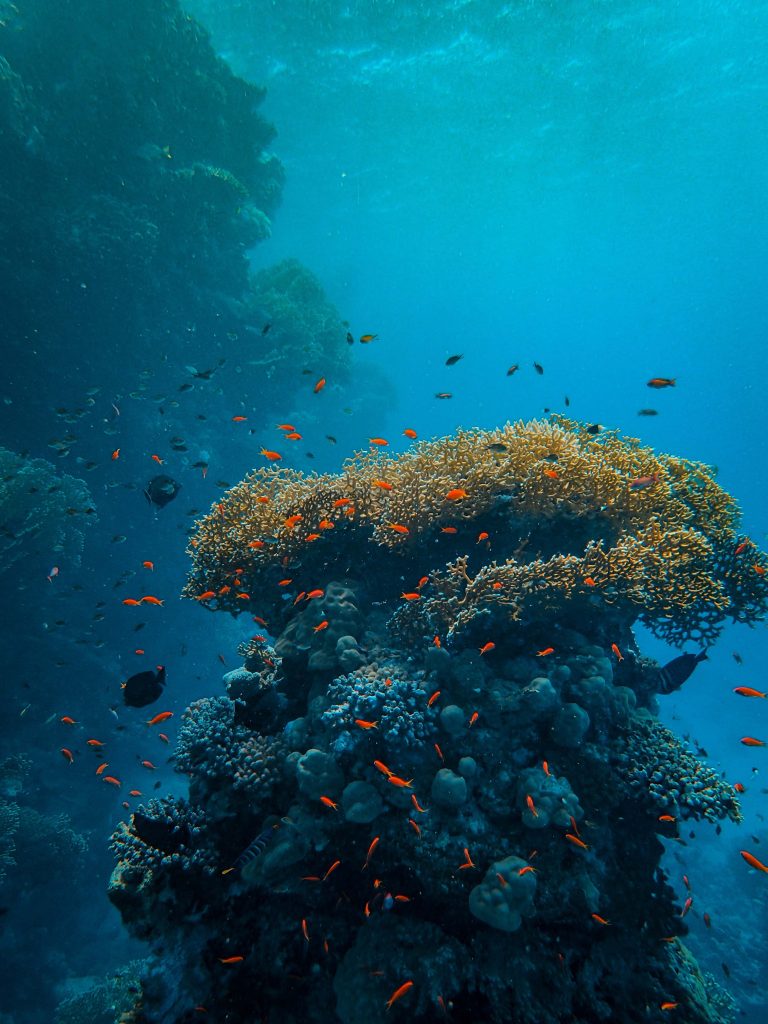 Ocean acidification defines the reduction of the pH value of the ocean caused mainly due to the uptake of carbon dioxide CO2 from the atmosphere. Since the industrial revolution, the concentration of CO2 has increased due to the burning of fossil fuels and land use. The NOOA explains that the CO2 that is absorbed by the ocean, several chemical reactions occur that result in the increased concentration of hydrogen ions. Therefore, the seawater becomes more acidic and causes carbonate ions to be relatively less abundant.

While the ocean absorbs around 30% of CO2 that is released into the atmosphere, as the CO2 levels increases, the levels of the ocean do simultaneously. This is mainly concerning because these carbonate ions are building blocks for shells, oysters, clams, sea urchins, shallow water corals, deep sea corals, and calcareous plankton (NOOA, 2017). The average pH-value of the ocean decreased from 8,2 to 8,1 during the industrial revolution, that equals an increase of acidification of 26% . Ocean acidification is one of the most critical anthropogenic threats to marine ecosystems (Bioacid, 2022). This does not only threaten organisms and ecosystems, impacting ecosystem services like food security, by endangering fisheries and aquaculture, but minimizes the ability to coastal protection like weakening coral reefs shielding the coastline. Transportation and Tourism are additional areas of impact. The ocean’s function to store carbon dioxide is affected and therefore its ability to help regulate the climate. The capacity of the ocean to absorb CO2 decreases as ocean acidification increases. Under the United Nations’ 2030 Agenda, the Sustainable Development Goal (SDG) „Life below Water“ has been established as well as describing target indicators to measure the  “average marine acidity (pH) providing guidance to scientists and countries about how to report and follow the best practices established by experts in the ocean acidification community (UNESCO, 2022).

You may be wondering how the fashion industry is related to the acidification of the oceans.

The fashion industry today is one of the most polluting industries in the world, being responsible for 4% of the global GHG emissions.  In 2018, 2.1 billion tonnes of greenhouse gases were emitted, mostly related to the current linear business model of the industry focusing on the „take-make-waste“ principle. 70% of emissions steel from the upstream-activities, thee manufacturing, production and sourcing of materials while 30% are emitted during the downsteam-activities, the use and disposal of garments (Global Fashion Agenda, 2020). Mainly concerning is the large dependency on fossil-fuel based feedstock, virgin synthetic materials like acrylic, nylon and polyester, which represent more than two-thirds (69%) of all materials used in textiles. This number is predicted to reach three-quarters by 2030. The reliance of fossil fuels for energy supply in the supply chain operations as well as the cheap prices that lead brands to synthetic material in huge quantities must be addressed. In 2015, the production of polyester was responsible for more than 700 million tonnes of carbon dioxide equivalent, similar to the annual GHG emissions of 180 coal-fired power plants.(Licensed to Greenwash, Changing Markets, 2022). It is clear, that the fashion industry is a main contributor to the elevated atmospheric carbon dioxide (CO2) concentrations and the effect of  marine environment in—ocean warming, ocean acidification and deoxygenation. Over the last 150 years, the oceans have absorbed a quarter of the carbon pollution that have been emitted to the atmosphere from human activities. Additionally, the oceans play an important role in absorbing more than 90 percent of the warming caused by those emissions. With the decrease of 0,1 in pH value  and about 50 % of the tropical coral reef systems being eliminated, the increasing temperature on ocean water mixing are catastrophic consequences for the marine habitats (Energy Futures Initiative, 2020). The increase in acidity is one of the consequences of climate change, and the rise in ocean temperatures and oxygen loss act concurrently with seawater acidification (Hindustan Times, 2019).

It sparks such a curiosity for the unknown. It’s rough, poetic, and has its own character, just like us humans.

Cultivation of marine microalgae and macro algae could be one of the solutions for limiting the acidity increase. The ocean’s surface pH value is predicted to decrease by 0.3-0.4 unites, a 100-150% increase in acidity (UNESCO, Ocean Abdication). Going forward, it is clear that the fashion industry has to recognize its negative impact on the ecosystem of the ocean. One key task is to remove CO2 from the upper ocean waters to reduce the atmospheric CO2 levels.

There are already various research projects and strategies on how to reduce and capture the CO2, called Natural Ocean Carbon Removal (CDR). Plants and organisms play a vital role and have a huge potential like mangrove forests, seagrass meadows, salt-marsh ecosystems, kelp forests that use photosynthesis to convert CO2 into biomass, some is buried and stored in sediment. Microalgae that grow in open ocean waters capture carbon and are consumed by other organisms, while some carbon is  sinking to the deep ocean. This process is called  the “biological pump.”  A huge benefit that differs from the land plants, that directly consume air CO2, is that marine photosynthesizing organisms use dissolved inorganic carbon (DIC) that makes its way into the oceans through the exchanges with the atmosphere. CDR is a crucial strategy to reverse some effects of greenhouse gas (GHG) emissions and “restore” the climate, as well as reaching the target of net-zero emissions by 2050 in order to limit warming to 1.5 degrees.

There needs to be research and innovations in their carbon storage capacity, their use in long-lived product production (e.g., plastics, carbon fibre) as well as their efficient harvesting and processing, disease and invasive species management, recycling of nutrients to allow a sustainable approach and avoid downstream pollution, exploration of safe genetic selection or modification to increase efficiency. (Energy Futures Initiative, 2020).

In the fashion and textile industry, innovations in bio-based materials based on seaweed and kelp could be beneficial due to their ability to capture CO2. One example is AlgiKnit, that is creating eco-conscious, renewable yarns from kelp (AlgiKnit Inc. 2022). SeaCell™ fibre developed by Smartfiber AG, is made from renewable and biodegradable resources. They use seaweed that is washed, dried,  ground  and combined with cellulose fibre using the Lyocell-process. Additionally, seaweed has a lot of beneficial properties like being essential in substances such as vitamins, trace elements, amino acids and minerals that help to activate cell regeneration as well as a high level of antioxidants. The company states that only the part of the seaweed that is able to regenerate, is removed in the harvesting process. The seaweed is entirely untreated to ensure its ecological value is retained. The fibre can be applied in sport and fashion clothing, underwear and loungewear or home textiles and can be blended with other fibres (smartfiber AG,2020).

THE TRUTH COMES TO THE SURFACE 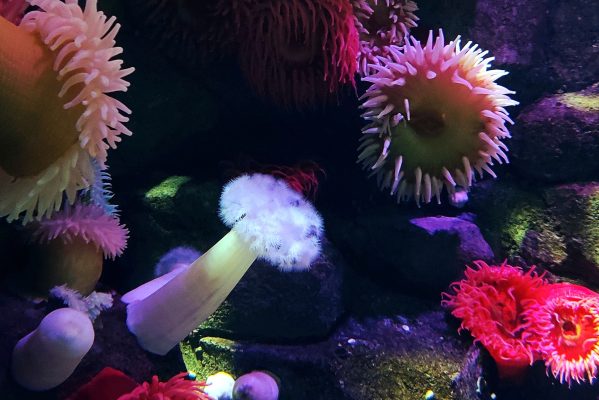 WITHOUT NATURE, NO ARTS, NOTHING. WITHOUT THE SEA, NO HUMAN, NO US.

Lisi Herrebrugh and Rushemy Botter are the design team behind the Paris-based menswear label BOTTER that hail from Curaçao and the Dominican Republican respectively. Since their debut collection in 2017, Fish or Fight, to its most recent outing with Romancing the Coral Reef, the brand has used fashion to express their connection to water and the problematic social and environmental problems of the oceans’ health (Dazed, 2021). In 2020, BOTTER launched their Coral Reef Farm on Curaçao, in collaboration with a local dive company (Curious 2 Dive). Additionally, the company aims to design 80% of their collections out of ocean waste plastic materials by 2022, collected by Parley during beach clean-ups. They support the Coral Nursery with a part of their profits. „For a BOTTER world“, they believe the synergy and harmony is key in the relation between human and water (Botter, 2022).

Coral Morpholic was founded in 2007 by marine biologist Colin Foord and musician J.D. McKay as an underwater media focusing on endangered coral reef.  The Miami based platform wants to establish a symbiosis between humans and corals by blending science. Their art should  educate and inspire today’s pop culture as well as future generations with the beauty of corals while restoring the reefs and protect the planet (Coral Morpholic, 2022). Inside, they’ve grown over 3,000 coral colonies in seventeen huge tanks that collectively total about 2,500 gallons (Dazed, 2013). Through their experimental artworks, Coral Morphologic wants to document aquaculture and protect the corals of Miami. Their recent projects include a collaboration with researchers from NOAA and University of Miami to get insights on the urban corals that are able to thrive living along the edge of the highway connecting Miami to Miami Beach. Their underwater camera Coral City Camera streams from the urban reef ecosystem along PortMiami and providing the public with a view into Miami’s aquatic life and biodiversity. They partnered up with Parley for the Ocean for Illuminating Coral, an eight-episode educational course that showcases the diversity and importance of corals for the global ecosystem and how we as humanity can preserve them in the future. Coral Reef City is another project, that was established in collaboration with the artist Bhakti Baxter that will remain until 2014 and features 18-vinyl-wrapped parking booths at Port Miami portraying Miami’s corals (Coral Morpholic, 2022). 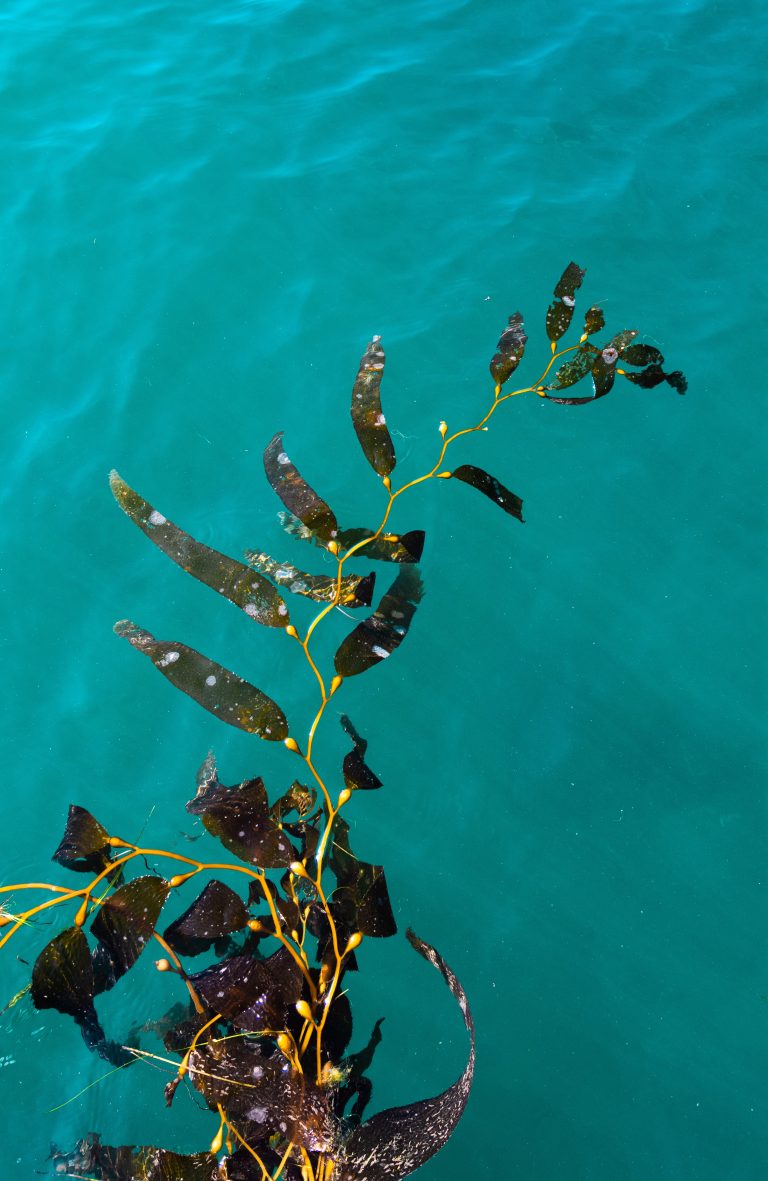 To conclude, it has to be viewed critically that the planetary boundary of ocean acidification is still marked in the safe zone, when we can already see the drastic consequences affecting us and marine life. The fashion industry is a main contributor to the high levels of CO2 emissions today, leading our oceans to increase in acidity continuously.  Acknowledging its negative impact on the health of the ocean, lowering the dependency on (raw) fossil fuel based materials, exploring innovations and benefits in seaweed or kelp-based  textiles, moving away from the linear business model are just some of the actions that need to be explored by the fashion industry to not exceed this boundary irreversibly.

This website should give insights into the relationship between the planetary boundary: “Ocean acidification” and the fashion industry. Until today, the planetary boundary is still in the safe zone and has not been exceeded, but research predicts a negative development in the next years. The ocean is crucial to limiting climate change, due to its function to store CO2. Its thriving ecosystem, variety and diversity of species that are mostly unknown  have to be protected. After explaining the term of acidification, its causes and impact, the responsibility of the fashion industry is given. The most important information will also be shown  in bullet points for a quick overview. Positive examples from the industry and upcoming projects that deal with solutions to  decrease the CO2 levels and restore the health of the ocean, should give a positive outlook into the future. Even though the planetary boundary of ocean acidification is still in a safe zone (this has to be viewed critically and with caution) there is the need to act in order to not exceed this boundary and further limit the negative impacts that have already been caused.