The global game market will generate revenues of $152.1 billion in 2019 (Newzoo n.d., Newzoo Global Games Market Report 2019 | Light Version), it is one of the most supported industries from the governance in Germany. But what is the impact of playing video games on our environment and how does this influence climate change? This paper will show up numbers and the connection between gaming behaviors and the change of our climate.

On the other side, this paper will give you an example of game developers who try to educate their gamers about the environment and our impact on climate change, while gaming! 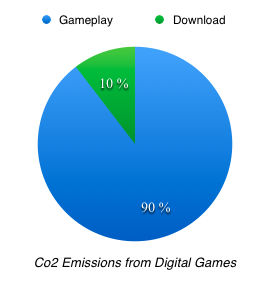 First, let’s have a look at the emission numbers and costs by producing and playing video games. The production of a digital video game creates 53% more Co2 than a physical game. A single physical video game creates 1.20 KG of Co2. A digital download on the other side creates 2.27 KG of Co2. But most of the pollutants are produced during gameplay! 89.6% of Co2 emission from digital games arise during gameplay and 10.4% of it originate while downloading a video game.

In California for example, the 1.5 million existing gaming PC`s used the energy equivalent of 4.5 million refrigerators in 2016. However, console and game producers are trying to reduce their emissions with special developments such as energy saver. The Xbox One Energy Saver mode uses 97% less energy compared to the instant-on mode. On average, it will cost $ 16.425 to keep an Xbox One in the instant-on mode for an entire year in the USA. This is compared to $ 0.53 while in energy-saving mode.

Another interesting and also scary fact is that there are currently more video games in existence than people, more than 7 Billion in 2016.  The worldwide e-waste has exceeded 92 billion pounds, which is the equivalent of 1.15 m heavy trucks, forming a line that is 14.300 miles long. Sadly but true, most of the plastic that is used to produce video games and consoles will never decompose. On the other side, if the world`s e-waste from 2014 was recycled, it would be worth $52 billion, what is the equivalent to 661,387 LBS. of gold.

It takes four gallons of crude oil to make one pound of plastic. If all games were downloaded instead of manufactured, that would save 2.4 billion gallons of crude oil. What is over four times Italy`s yearly oil consumption! (Big Fish, Kristina L., 15 November 2016, Environmental Impact of Video Games) But according to the US market research NPD, 74% of gamers prefer to own physical copies of video games in 2014. (Statista, Statista Research Department, 3 April 2013, U.S. core gamers* who purchased physical or digital video games in 2013 and 2014) In the same year, the NPD established that $5.47 billion dollars worth of physical video games were sold. While the exact number of units sold in the year before wasn’t released, you can guesstimate that number by assuming that these games were sold at $60 apiece. This assumption would mean that 91,166,667 physical video games were sold in 2014. But many of these games were sold for less, so the real number is probably far higher. (Big Fish, Big Fish Games, 23 February 2015, Are You Environmentally Conscious About Video Games?)

The good thing is that the number of digital gamers raised up to 26% in the same year. (Statista, Statista Research Department, 3 April 2013, U.S. core gamers* who purchased physical or digital video games in 2013 and 2014)

Can we see this as good news? As already mentioned the main argument against the sale of physical video games is that the resources like plastic needed to manufacture, transport, and distribute these games result in a much larger carbon footprint than that of a downloaded copy. On the other side, this paper showed already that a download takes much more Co2 emission than the purchase of a physical game.

The reason for this discrepancy is electricity! New generations of gaming consoles consumed around 10 billion kilowatt-hours of electricity in 2016. (NRDC, Sarah S., 28 January 2016, The Stealthy Energy Saver) The downloading of a single game by millions of players leaves quite a large carbon footprint. And while most gamers leave their consoles running for extended periods of time for each video game download, this amounts to even higher carbon emissions. (Big Fish, Big Fish Games, 23 February 2015, Are You Environmentally Conscious About Video Games?) It’s hard to find the right balance but in case of the use of plastic, you could say that the download of a video game is harming the environment less than a physical game.

But are there also any positive sides by playing video games? While the change of our climate can be seen more and more, the game developer is beginning now to internalize the ecological crisis and the topic of climate change into video games. There is a niche subsection in this field which is going to explore the issues with admirable frankness such as Imagine Earth. (Vice, Lewis G., 21 June 2019, Gaming’s Climate Dread in a 4K Streaming Ecosystem) It is „a build-up strategy game and a real-time planet simulation. Your job as a space colony manager is to explore and populate distant planets. Build up thriving and profitable colonies on a global scale and trade resources and goods. The game is about the age of space capitalism in which several corporations are fighting for economic supremacy on various planets. It turns into a climate survival thriller as their ongoing struggle for growth is threatening the global ecosystem.“ (Imagine Earth n.d., Imagine Earth. Planetary Colonization) This example is only one of a few that are educating their gamers about climate and environment while gaming!

To sum it up, the production and the gameplay itself is harming our environment as everything that human actions do at the moment. It seems like the human itself is the worst thing that could happen to nature. The high amount of plastic use that is needed for production is one of the worst things because it is not compostable. The other bad thing is the high use of electricity and bad Co2 emissions. On the other side, the gaming industry seems to take responsibility now by developing video games that are educating their players. In times of gamification movements, it seems like this could be one of the best ways people will see and understand the problem of climate change. The question that is still not answered is, if the gamers can take their insights into real life.