is the contribution of buildings to global GHG emissions 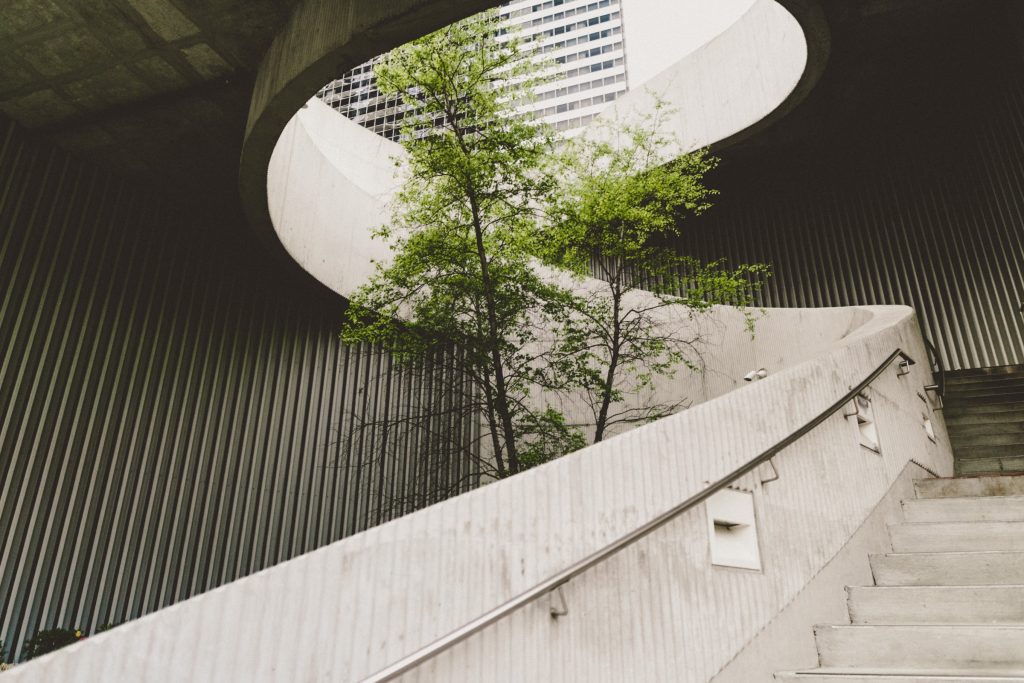 Emissions from buildings and the construction industry are reducing the chance of reaching the Paris Agreement targets.- WEF, 2021

With nine billion people projected to inhabit our planet by 2050 and three quarters of that population living in cities, climate change is not a topic that is going away any time soon. — World GBC, 2021

The building sector has the most potential for delivering significant and cost-effective GHG emission reduction. – UNEP, 2009

In 2015, 196 nations committed themselves to the Paris Agreement, a legally binding international treaty on climate change, at the COP 21 in Paris. The goals are  to limit global warming to well below 2, preferably to 1.5 degrees Celsius, compared to pre-industrial levels and to achieve a climate neutral world by 2050. (UNFCCC, 2015) These goals are of major interest for politics and industries globally and should therefore be taken serious by the building industry.(UNFCCC, 2015)

“Just three materials, namely concrete, steel, and aluminium – are responsible for 23% of total global emissions (most of this used in the built environment)” (Architecture2030, n.d.)

Also, the operations of buildings are directly and indirectly contributing 28% to global GHG emissions. The major contributors in terms of buildings operations are heating, cooling,  lighting and in general use of electricity.  “At an 8% increase in 2018, space cooling became the fastest-growing use of energy in buildings since 2010, though it accounted for only a small portion of total demand at 6%.”(GABC, 2019) Especially, the space cooling energy intensity has increased as a result of greater cooling demand in hot regions. This effect will be reinforced even more, because extreme heatwaves will become much more intense and frequent, due to climate change. (GABC, 2019) 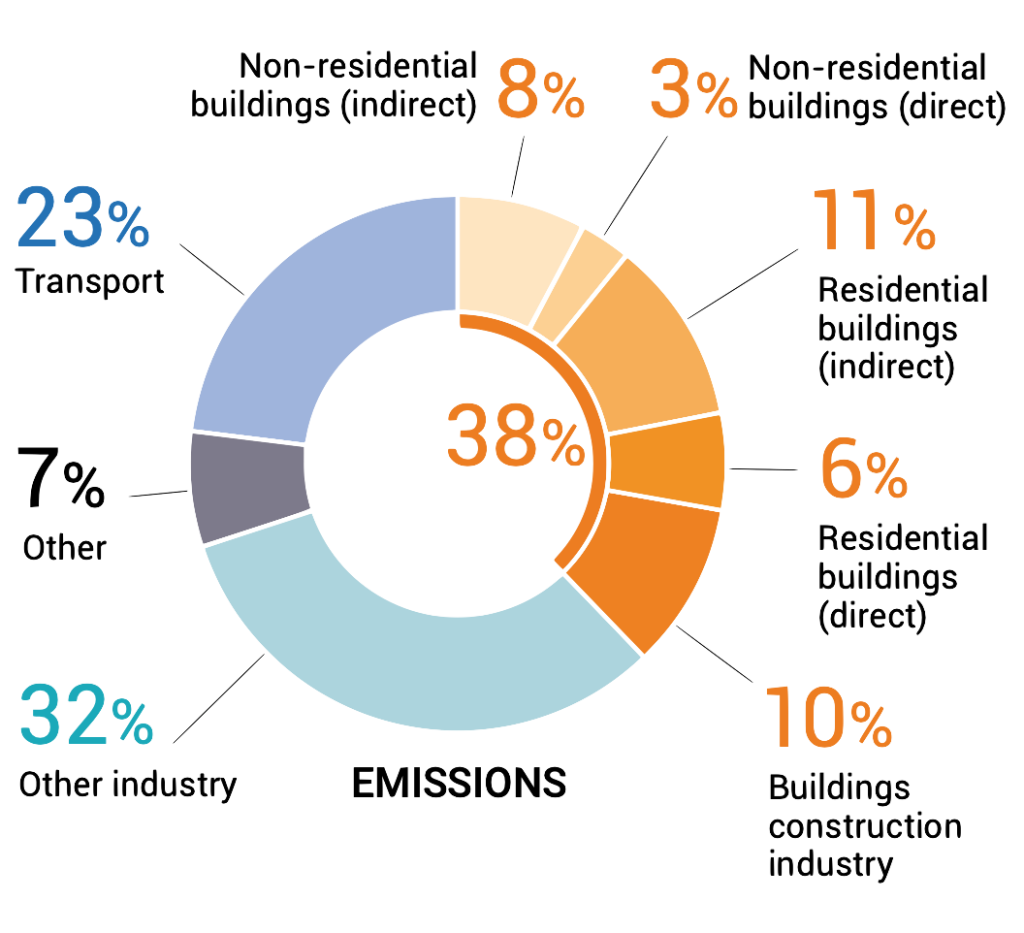 Therefore, we not only have to pay attention to the climate neutral construction of new buildings, but also how to decarbonize existing buildings.  That means especially so-called stranded assets, buildings highly depending on oil and gas and high direct and indirect CO2e emissions, that are at high risk of devaluation due to changing regulations need refurbishment, through additional capital injections.(Architecture 2030, n.d.)

First, the CO2e intensity of the materials in the upstream process, mainly cement, steel and glass, need to be reduced, and the materials need to be optimized for carbon sequestering. Alternative materials are wood, clay and recycled concrete.

Second, to lower the GHG emissions of the use phase of the building, clean and renewable energy needs to be implemented. That means every existing building will need to undergo energy upgrades. Those upgrades will include a combination of improvements in the energy efficiency of building operations, a shift to electric or district heating systems powered by renewable energy sources and the generation of carbon-free renewable energy. Because energy upgrades can be quite expensive, they should be aligned with market-driven intervention points. Intervention-points include renovation or material replacements of buildings, if those intervention-points are used to integrate renewable energy generation and other decarbonization renovations, costs can be reduced, and local jobs sustain.

Third, closed-material-flows need to be integrated in the whole lifecycle of a building. Materials need to be designed for circularity and deconstruction, so they can be reused for a new building, instead of being incinerated or downcycled.(Müller, Krick and Blohme, n.d.)

One innovative actor in the field of circular construction and building is Concular. Conculars goal is to make the building industry climate neutral and reform the current system of building by collaborating with other actors of the industry. To make the entire industry more transparent and also collaborative, Concular set up a digital database, to create digital passports for different materials or entire buildings. They want to make the sector more resource efficient by encouraging the companies they work with  to reuse their materials as often as possible.(Concular, 2020)

“With thoughtful attention to the design and construction of our built environment, we can reduce vulnerabilities and thereby lower the disaster risk to human life and well-being.” – UNEP, 2021

“There is consensus in the scientific community that climate change is increasing the frequency, intensity, spatial extent, duration, and timing of extreme weather and climate events, leading to increased climate-related hazards.”(UNEP, 2021)

Unfortunately, it is not enough to only decarbonize the construction and operations of the building sector, buildings also need to be resilient against the environmental consequences of climate change. Rising sea levels and increases in tropical cyclone storms and precipitation intensity will increase the probability of coastal city flooding, which is a major thread to buildings and therefore humans. The most severe effects of climate change are expected to happen in tropical areas, where mostly developing countries are located, which are the most vulnerable to those events. An example of the devastating consequences climate change has on buildings is the Tropical Cyclone Kenneth. It is one of  the strongest storms in modern memory, it hit Mozambique and left behind devastated infrastructure, destroyed homes, workplaces, and schools through high winds, flooding and heavy rainfall.(UNEP, 2021)

First, materials need to be designed for durability, withstanding various extreme weather conditions, such as extreme heat or heavy rain. Investments into the refurbishment of buildings, by the cities and local governments, are needed to address climate hazards. It is also important not to exclude vulnerable communities or developing countries from these investments.

Second, the heating and cooling, as well as insulation concepts need to be improved, to ensure the peoples’ wellbeing.

Third, water management needs to become smarter, water consumption needs to be decreased to the minimum in the construction, as well as in the use-phase of the building. Also, opportunities to reuse water need to be further developed.

Four, reduce soil sealing to the minimum to avoid heavy water flows and erosion. Investing in land use change  can foster carbon sequestration and reduce the risk of erosion.(Müller, Krick and Blohme, n.d.)

A good example for the realization of those principals in the Northern Hemisphere is the Moringa project. It needs to be said that not every building project is a good example for every country, as different areas in the world face different climate-hazards and social as well as economical challenges.(cradle2cradlecertified, 2022) 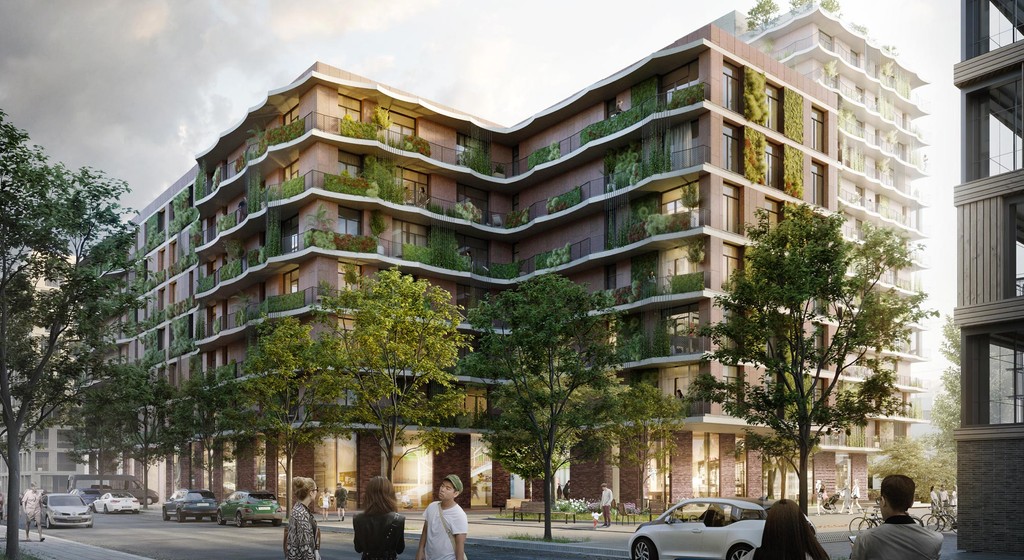 The Moringa project is a cradle-to-cradle building, which is constructed in the port city of Hamburg by Landmarken AG. The building will mostly consist of  price bound tenements and will be finished in 2024. The LCA of the building is 55% better than the LCA of a conventional reference building. More than 50% of the building, including materials and design strategies, are cradle-to-cradle certified, meaning elements can be deconstructed and reused, as well as being sorted unmixed. For the facade of the building, a feature called timber cascading is used. It includes using exclusively wood as a material in a structure that can be easily dismantled, as well as recycled and burned to generate energy in the last phase. 210 m² of the building are covered by photovoltaic systems. The building is also designed to reuse rainwater and gray water for irrigation and other non-potable water functions, like toilet flushes or plant watering. Also, 105% of the area are green spaces, they are used vertically and horizontally to cool the microclimate of the area, especially on hot days. They also improve the air quality and help to sustain biodiversity. Nevertheless, there are also many challenges a project like Moringa is facing. Even though the DGNB (Deutsche Gesellschaft für Nachhaltiges Bauen) is promoting the use of more sustainable materials in the building industry, the reality looks different. C2C materials are still very rare on the market and if they are available it is often two or four times the price of the conventional material. Even though Germany and the EU are starting to implement more regulations to decarbonize the building industry, through the implementation of the ESG scoring and the EU taxation, it is still cheaper and therefore more profitable for project developers to do business as usual. Another challenge is the small availability of used materials, like Concular offers them. The Moringa project in Hamburg is too big to work with Concular, because there are not enough materials stored, to make the building look consistent and aesthetic in the eyes of the architect. Also, the question of the storage of used materials has not been answered fully by Concular. Concular would like to sell materials directly to the project developer, but that doesn’t work for them, as they plan the project over a timeframe of months to years. In a nutshell, there are still numerous challenges, that are not all mentioned in this paper. The Building sector needs to be transformed to achieve our climate goals and to be prepared for the hazards of climate change, that we are already feeling. (Heitzer, 2022),(Moringa, n.d.)