There is a boom in the video game industry. Globally, there were 2.69 billion gamers by 2020. There’s no doubt that gaming has a variety of personal benefits, including improving manual dexterity, improving social skills, and even reducing stress. However, a growing number of studies indicate that video gaming’s environmental impacts are projected to rise, from the mining of materials for gaming consoles to the energy intensity of cloud gaming. The gaming sector and individuals can improve sustainability, in order to explain how, we should explore its environmental impacts.

A large carbon footprint is left behind by video games themselves, as well as how they are manufactured, shipped, and sold. Even digital games can contribute to climate change. The majority of games are played online, which requires a lot of data usage, contributing to “internet pollution,” which is responsible for almost 3.7% of all greenhouse gas emissions.

tons of CO2 per employee

million tons of CO2 per year from making games 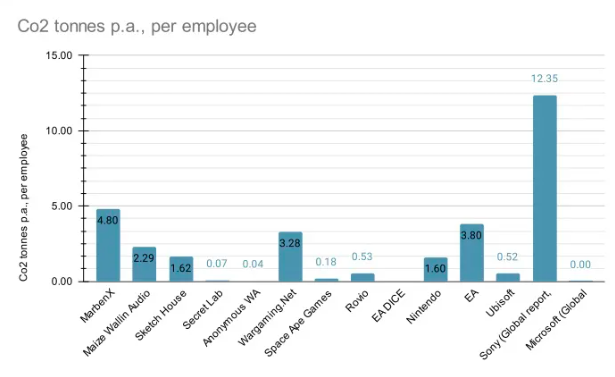 The methods and locations of mining the materials have been subject to controversy in recent years. Some are untraceable. The problems associated with environmental degradation and human rights abuse have been seen by some companies. It isn’t all bad, though. Companies like Nintendo have made an effort not to mine from controversial countries, but have been met with some mixed results from their suppliers.

Mining is extremely damaging to the environment. From extraction to production, billions of kilograms of CO2 are released into the atmosphere. According to Sony, since the Playstation 4 was released in 2015, 8.9 billion kg of CO2 has been produced. In Digital Games After Climate Change, Dr Ben Abraham shares his research on what climate change means for the games industry. The data he collected showed that every company, studio, and developer he studied – including Ubisoft, Nintendo, and Microsoft – generated between 1 and 5 tons of CO2 per employee. According to him, if you multiply that by the number of game developers in the world, whether they work in offices or from home (approximately 500,000 to four million at present), you get somewhere between three million and 15 million tons of CO2 per year from making games. These numbers come only from the carbon emissions from energy used in gaming development offices, whether it is computing, running servers, or even just keeping the lights on – not playing them, not getting them into players’ hands, not thinking about waste like discs going to landfills, or not using servers.

This puts the game development industry around the same emission intensity as Slovenia’s total 2018 emissions with a population of 2 million. As a result, the global film industry emissions are at the low end of our range of possible game-related emissions.

There are some movements toward finding solutions to environmental problems, especially carbon footprint, in the game industry as well. The organization, Playing for the planet, aims to inspire young people to learn and act in support of the environment. The Playing for the Planet Alliance was launched in September 2019 at UN Headquarters in New York during the UN Secretary-General’s Climate Action Summit. The initiative is being facilitated by UNEP with the support of GRID-Arendal and Playmob. To become a member of the Alliance, companies must make a range of commitments, such as integrating green activations into games and reducing their emissions. ( Playing4theplanet 2022) According to the 2021 Annual Report, Playing for the Planet aims to rally the industry to reduce its carbon footprint and to provide it with the tools to measure, reduce, and set targets to decarbonise. Secondly, to expand the Alliance continuously to create a positive impact on the industry and environment and to share the learning of the initiative with others within the industry.

At present, the organization has 32 gaming companies and 7 associate members. The members include big companies like Sony, Microsoft, and Ubisoft, as well as small and medium-sized game studios. With further work on targets, definitions, and increased ambition set for 2022, 60% of Alliance members have committed to becoming carbon negative or net-zero by 2030.

Since 2019, Playing for the Planet organizes the Green Game Jam. In the Jam of 2021, 30 companies showcased new green activations in their live games to educate hundreds of millions of players with 26 companies committing to implement activations. To extend the scope of the Green Game Jam it was opened up to all platforms for the first time. Conservation and restoration of forests and coral reefs were selected as the themes to aggregate the impact of the Jam. With a collective monthly active user base (MAU) of more than 1 billion gamers, the studios shared the importance of conserving and restoring forests and oceans through in-game and out-of-game touchpoints. (Playing for the Planet, 2022)

One of the other big projects Playing for the Planet participates in is the Green Games Guide partnered with Ukie and Games London. The Green Games Guide is the first resource that contains practical advice and outlines steps that game businesses can take to reduce emissions and waste across their offices and operations.(Ukie 2022)

The guide has the Life cycle assessment of the gaming industry to explain the impacts of the industry from the beginning to the end and explain the companies where can they start to change to reduce the emissions.

Basically, the guide instructs brands on how to define their scope and timeline, as well as calculate their carbon footprint. The next step is to implement an ambitious action plan to reduce their carbon footprint at this point. In order to do that the guides offer to control & reduce office energy use, Switch to a sustainable energy supplier and ​​review data storage policies in detail. In the case studies, they collaborated with companies such as Sony and Space Ape to explain how to apply the guidance in the real world. According to their case study, Space Ape is one of the games sector’s leaders in addressing the impact it has on the environment. The studio now offsets 200% of its carbon footprint, reduced its studio footprint by 25% in 2019 and committed to reducing it by a further 10% in 2020. ( Green Games Guide, 2021) 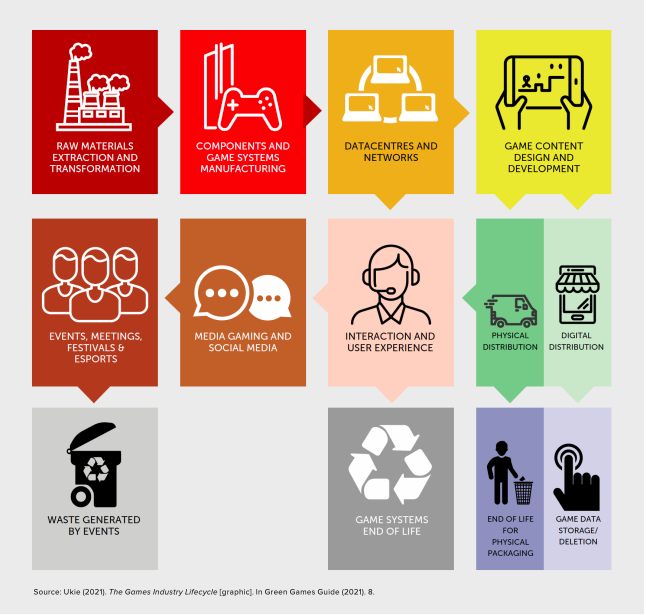 It can be concluded that the gaming industry has made considerable progress in terms of green actions over the last two years. With the support of the UN Environment Programme, it becomes increasingly important to reduce the environmental impact of the entire industry, as well as raise awareness among the end-users. While we cannot say the current actions are enough, we can affirm that incremental improvements are being made every year.

Epps, D. (2022). How the game industry is fighting its carbon footprint. [online] Polygon. Available at: https://www.polygon.com/features/22914488/video-games-climate-change-carbon-footprint.